Today we released the most significant update to Aesop Story Engine since its inception seven months ago. This update removes the friction created with editing components and dramatically improves the workflow involved in crafting compelling narratives within WordPress.

Each component in the editor now shows as a placeholder with the appropriate name. On this placeholder are two icons: a pencil icon and a trash icon. When you click the pencil icon, it’ll bring up that component’s settings allowing you to easily edit on the fly. You can also click the trash icon and it’ll delete the component. How awesome is that?

A lot of thought went in to how to best serve the settings. Previously, the settings were packed down a scrollable interface that made the basic task of adding a component rather cumbersome. With 1.1 we’ve matched the design pattern of the exiting modals in WordPress and have placed the settings near full-screen. This allows quick and easy access to the settings that you need most, when you need them, without a bunch of additional and unnecessary work.

The user interface is completely responsive both horizontally and vertically. So whether you’re on a 27″ iMac, or a small laptop, the story engine will always look as amazing as we’ve designed it to be. 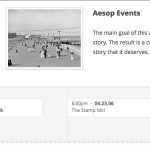 Aesop Story Engine 1.1 is now capable of supporting 3rd party components. Components are packaged like a normal WordPress plugin, with a few actions and filters that hook directly into the story generator and placeholder API. An example of one such component, which we’ll be releasing in the coming weeks, is called Aesop Events (prototype demo here).

The parallax features in Aesop Story Engine have been optimized to be less resource intensive on both browsers and CPU’s. We did this by only letting the parallax movement happen when the component is in view. We’ve also improved the Parallax Component offset by having this value automatically calculated. As a result, the component should be a bit easier to use while also performing significantly better. 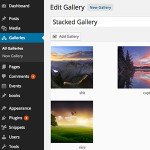 Multiple improvements were made to the gallery component on both the back-end and front-end. To start, we’ve added the Galleries to the actual story generator. We’ve also made it to where all you have to do is select the actual gallery instead of supplying the ID of the gallery. In addition, we’ve optimized the logic of how the gallery images are pulled, saving quite a few lines of code, which should significantly speed up the process of retrieving the images.

Up until 1.0.9, we left most of the CSS up to themes. While this does have its advantages, we quickly realized that an out-of-the-box solution was needed. So, we introduced the add_theme_support snippet back in 1.0.9. Well, with Aesop Story Engine 1.1, we’re extending this just a little bit more to include the Timeline component.

This really useful component should now work within most themes. In fact, with the added theme support snippet, Aesop Story Engine 1.1 is now compatible with 99% of WordPress themes. Of course, nobody knows the technology better than we do, so we do recommend our premium themes that not only make your site beautiful but also furthers the development of the free story engine plugin.

The fun doesn’t stop there! We’ve added a ton of new filters and actions, have reworked how the current filters work, added captions to the grid gallery component, better support for Aesop Lazy Loader, in addition to quite a few bug fixes.

To celebrate the release of Aesop Story Engine 1.1, all of our themes are available for 15% off! Just use coupon code aesop1point1 at checkout. Overall we are really, really excited to be releasing this update and we really hope that you enjoy what we’ve created for you!

P.S. – This monumental update I couldn’t have done by myself. Aesop is now Team Aesop. Since launching Aesop Story Engine, Aesopinteractive LLC has grown from just myself, to a team of individuals who are just as passionate about the project as I am. I’m extremely grateful, and humbled by this.

Those posting on our support forums may have already met Jenny. We’ve known each other for years and her specialty is making sure our users are happy. She loves to cook, like cars with big rims, and has four crazy boys.

The sexy editable components feature would not have been possible without ET. Eugene and I go way back, just as far as Jenny and I, and I truly consider him to be one of my great friends. And, since we survived working together for 1.1, he’s going to be helping created a lot more interactive magic. Not only is Eugene one hell of a programmer, but he’s an accomplished lawyer, and has his own bootstrapped startup Law.fm.

Lastly, if you noticed our social channels becoming a bit more personable, you can thank Michael for that. Michael is a huge asset with his experience with social media and general support. After all, the only “buffer” I know is with memory in programming. So there you have it! Team Aesop, at your service!

Get the Aesop 1.1 update automatically within your WordPress admin and checkout the ASE changelog for a complete list of changes. Happy storytelling!