In our video that introduces Aesop Story Engine, we show a few clips of an area that allows you to create a “story cover” for your story in the form of an image.

Story cover options as shown in the Aesop demo. 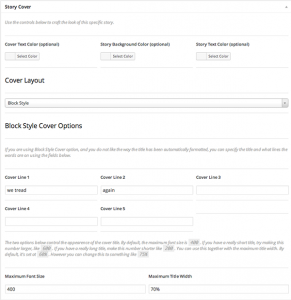 There’s been some confusion as far as where this panel is actually coming from, so we wanted to take a few minutes to clear up any confusion.
Aesop Story Engine packages the tools necessary to build this panel, but does not provide this built pre-panel out of the box by default. Here’s why; those controls to adjust the cover of a story, are considered a “theming” feature. Because we can’t predict what the theme will look like, all we can do is provide the tools to make creating those panels, in themes, easy. If we provided this pre-built panel out of the box in the plugin, we’d be stepping on theme developers toes. If you’re a theme developer, and want to build in this panel, here’s the code you’ll need to build that. Here’s more code on how to retrieve those options.

So when themes for Aesop are being released, keep in mind that the theme may not have all of the features demonstrated on the plugins demo. What is included is at the sole discretion of the theme developer, but however does not mean that it’s not capable of doing this.