To say this year has been amazing is an understatement. But for lack of better words that remain PG-rated, this year has been exceptional, and it’s all because of you. With 1.1 now out the door, we wanted to give you a look at what we’re planning next.

Before we head into where we’re going, I’d like to first begin by sharing a bit of where we’re at as a company. In only seven months, we’ve grown from a one person operation to a growing team of passionate individuals who are dedicated to empowering long-form writing. And our sales seem to reflect that too.

We’ve put a solid 1000 hours into Aesop Story Engine up to version 1.1, and we don’t plan on stopping anytime soon. The update frequency will die down just a bit but the Aesop quality will not. We feel Aesop Story Engine has matured to a certain point that we can now pursue other things alongside the routine maintenance of the plugin. We’re mostly finished adding new features however we do have some exciting changes in the works that will make using Aesop Story Engine easier than ever. You can expect this in the form of Aesop Story Engine 1.2, due out within the next few weeks. Amazing new add-on components will make Aesop Story Engine extensible for any situation.

Naturally, one of our goals is to attract more users. We’re attempting to make this possible with our Aesop ‘s ____ campaign. We’ll slowly be creating a different campaign for each dedicated subset of users. As of now we have a special campaign setup just for the Writers and Storytellers as well as a special place setup just for Developers. Next on the radar is a campaign geared toward schools and universities who represent a large percentage of Aesop clients. 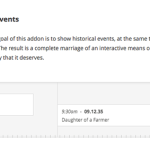 We have some new and exciting add-on components for Aesop Story Engine that will enhance your storytelling and writing in some truly amazing ways. Aesop Events shows historical events styled with a cool draggable events area and is fully compatible with any WordPress theme.

Aesop Gallery Pop is a gallery component add-on that we think is absolutely amazing (and will be released in the coming weeks)! This add-on was largely inspired by the clean and attractive galleries found on NY Times articles like this one. The image is linked to a lightbox gallery that’s fully responsive and built for large screen viewing.

Lastly we have Aesop Stories. Think of Aesop Stories as a “theme in a plugin.” We’ve been beta testing Aesop Stories for a while (it’s the same plugin that drives our Original Story Series and The Quiet Day). This add-on will be a great solution for one-off projects and will fit nicely into an existing WordPress site without having to completely switch themes. You can expect Aesop Stories to be available around the beginning of November.

The WordPress themes that we build are timeless. They’re each the result of months of planning and brainstorming, and are designed for one thing: showcasing your writings. Instead of releasing a theme each month, we believe in practicing quality over quantity. We also believe in the value of a professionally designed theme, and it’s for that reason (and others) we only release four themes a year.

As you can imagine, the bar is set pretty high. Novella is the last theme we released and its sales volume will soon eclipse that of its arch nemesis – Jorgen. We’ve got some great ideas for the new theme including the possibility of “something sideways.” Do you have ideas for us? Sound off in the comments below or hit us up on Twitter @aesopinteractiv.

Since the inception of Aesop Story Engine, we have planned to have some sort of hosted environment that would let you create stories within minutes. We want to create a curated environment of writing and storytelling tools without you having the burden of the technical stuff that comes along with it. Our goal is to completely change the way digital stories are created, consumed, collaborated, and shared – and we’re finally in the beginning stages of building this out.

We have some amazing ideas! We’re doing all the work internally and we’re shooting for an invite-only beta by the end of the 2014. Of course we’ll have much to share between now and then so you’ll just have to wait until the next chapter.

That about wraps up what we’re up to for the rest of the 2014. What do you think? Is there anything specific that you’d like to see happen? Sound off in the comments below or hit us up on Twitter @aesopinteractiv.